Girls are great to have fun with in high school and college and they can even be a good way to sow your wild oats before you mature but that’s about it. There comes a time in every man’s life when we stop dating girls and start dating women. I’ve been doing this for years on Milfplay, but some choose other networks to connect with women. It’s their prerogative I guess but I’m telling you it works great.

One thing I must make clear is that this doesn’t necessarily mean age. Some hold on to the “girl mentality,” even when they get older. Here are the main characteristics that show you that you are not dealing with a girl. You are dealing with a woman… 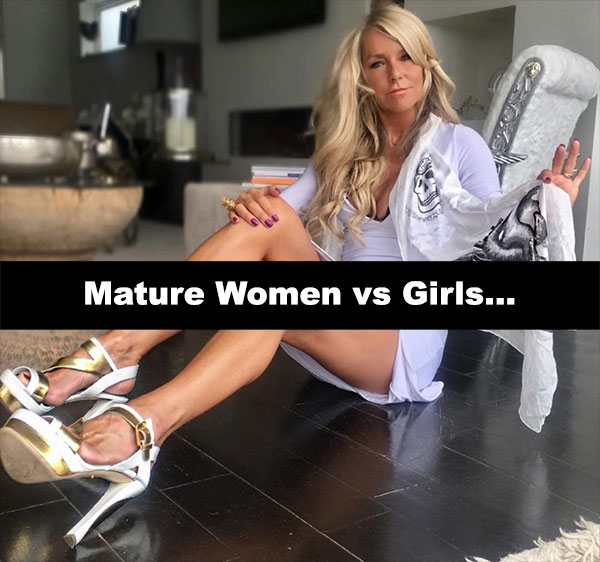 Dating Mature Women Versus A Girl

Here are the things that you need to be on the lookout for when it comes to dating mature women today. I’m a firm believer that they do just about everything better and many of them will gladly prove it to you if you call them out on it.

She doesn’t have selfish tendencies. A woman thinks about others and not just herself. A girl is wrapped up in her own drama, but a woman is done with drama. This might be one of the many reasons that I’m such a milfaholic today. It’s because they live to please and they do it so damn well!

She speaks more positive about people than negative. A woman will talk about the people that she likes, but a girl will complain about people she doesn’t like. Another testament that women don’t like drama.

She doesn’t beat around the bush. A woman will be straightforward and tell you what’s on her mind, good or bad. Even the older Vegas milfs that I meet up with for a drink and bang at the Wynn pool are all about keeping things upfront and legit. A girl will play games and make you guess what you did to upset her.

She doesn’t act like she’s up to something. Women don’t leave you wondering what’s going on in their heads because they don’t see the need in hiding their feelings. Girls will leave things unsaid and come off as shady when it’s clear they’re hiding something.

She makes you feel appreciated. Women know how to make you feel like a man and appreciate you for who you are. A girl will take you for granted and demand appreciation when she doesn’t give it.

She is rational in arguments. Most aged women make the effort to try to understand where you’re coming from in a disagreement. Girls think they are right all the time and allow their emotions to rule over rationality.

She doesn’t have a wandering eye. Women are focused on you and having a good time with you. Even if you’re in an NSA relationship with an older lady, she’s all about you at that very moment and nothing else. Girls are always watching out for something better and get off on attention from other guys.

She has ambition and focuses. Women know themselves and know what they want to do with their lives. Girls don’t know who they are yet or where they’re going. They’re just along for the ride.

This past weekend I ended up taking a trip with some friends of mine. We went to Atlanta, GA for a long weekend trip and I must say that it was much more fun that I’d expected it to be. I’ll start by saying that it’s not at all what you think. If you’re thinking this place is boring or uneventful, then you’re without a doubt wrong as can be!

Atlanta might be in the south, but it’s the ninth largest metropolitan area in the United States with over 5 million people. The bustling southern city also boasts some of the hottest cougars in the country. If you come to ATL and want a sampling of these lovely ladies, there are more than a few places to find them. Here are the best places to find the hottest cougars in this city. Now, keep in mind that I’ve done a significant amount of research on the area prior to traveling. This helped optimize my time in the city and only go with my gut feeling and what my research told me to do. I’m laying it all out on the line here for you so you don’t have to waste time or money. Just stick to the places suggested and you’ll do just fine.

Stop by any Starbucks or visit a cool bookstore like A Cappella Books or Atlanta Vintage Books and you are likely to find plenty of cougars just hanging out, giving you a chance to approach them in a quiet setting.

Whether you visit Piedmont Park, Centennial Olympic Park, Grant Park, or Historic Fourth Ward Park; you are likely to see more than a few southern belle cougars taking in some sun and relaxation.

t’s a little more of a challenge to find an available cougar in a mall, but Atlanta malls like Copley Place, Antique Row, or Philips Plaza are chock full of mature ladies if you don’t mind looking for the single ones.

The Atlanta History Center and The High Museum of Art are wonderful places to find smart and cultured cougars that might use you as an excuse to get a little wild.

The Forum Athletic Club and LIV Fitness are wonderful places to find a tight and tone cougar who is looking to show off her body to a younger man and give him more of a workout than the gym can.

Check out some of the more popular nationwide cougar hookup sites and narrow your search down to the Atlanta area. Trust me, you will have more than enough to choose from and a chance to hook up with all of them, one at a time. I’ve been using this one site for years and it worked while on my trip. Give that a shot and let me know how you make out.

Places like Atlanta Craiglist and the Classifieds are among the seediest places to find cougars. This without any question should be used only as a last resort! That is, unless you are willing to pay for cougar sex. Every once in a while, you can find a mature lady who just wants sex and doesn’t mind advertising. You can also choose to post an ad of your own letting the ladies know you are available to be ravaged by an older woman. Approaching any hot mature women is an art, one that requires detail, patience and the use of proper techniques. If you want to approach a woman, here are four tips that can absolutely help you achieve your goal of connecting with some smoking hot older woman and hopefully banging her.

One of our biggest tips regarding approaching a well-seasoned milf is to not fear rejection. These types of women love a guy with confidence. Think about it, rejection comes and goes really. It’s simply all part of the game. Therefore, you should be your confident self when it comes to approaching a woman. Try to make sure that you don’t let this get in your way. Lack of confidence will destroy you. Even if you are rejected, what matters is that you still approached her. Therefore, the whole idea is to realize the fact that you have to get to her before anything can happen. Then you simply need to let things take their natural course.

Ask For An Email

It is common practice to ask for numbers when you like someone but that technique is not the only one that works. Don’t be afraid to get her email instead. Getting her email address is still somewhat professional and realistic. It is a very unusual way of approaching a woman since all typical guys ask for a phone number. Dare to be different and stick out from the rest. If you want to get her attention, this is probably the best way to do it.

Don’t Be Classified As A Friend

Try to make sure that you don’t ever get classified as her friend. If this happens then you’re royally screwed. Unless this mature woman is an absolute slut that love fucking her friends, then you don’t want that title. It doesn’t matter if you are nice to the woman or whether or not you’re considered a nice guy or a bad boy. The general key is to understand that you can never be called her friend because once you jump in that zone, there’s no way you’re getting laid.

Getting the attention of any mature women that you meet (online or offline) isn’t simple but it’s not impossible. Put forth the effort and you’ll certainly be fucking some mature pussy in no time!

Let me start by saying that I’m not Jewish but I love dating Jewish milfs. There are plenty of reasons why I truly enjoy their company. I’ll be sure to tell you every single reason that I think any hot mature Jewish lady is worth dating, banging and possibly marrying for that matter. No, I’m not getting married anytime soon, but I will continue to seek out these mature ladies to take to pound town. Find out why I love each one of them. I’m going to lay it all out here and tell you why I crave Jewish women day in and day out. They are really the perfect woman when I think about it and after reading this you might think just the same. Let me get started right now…

Jewish women can’t cook like fucking pros. No lie on that tip. A perfectly seasoned Jewish lady can make the best dish you’ve ever eaten. Sometimes, I like to find mature women that have “cooking” on their bio and if they are Jewish, I immediately ask them to cook a meal for me. They love doing it and they are professionals in the kitchen. I fill myself up on their food then I fill them up with my dick.

They Are Loyal To The “D”

Jewish matures are seriously loyal to good dick. They always come back for more whenever possible. I’ve been with a ton of older Jewish women and they will do just about anything for a guy that fucks them good. They never stray too far either. That’s definitely a plus when it comes to things.

They Stay In Shape

Most of these women stay in tip-top shape throughout the year and as they get older it only gets more noticeable I’ve seen many mature Jewish women working out at the local gym and they are always there 24/7 (or so it seems). As you get older and out of shape, these women are getting better looking. It’s almost as if it’s in their DNA!

She’s Got A Sense Of Humor

Jewish women are funny and they have a great sense of humor. Some people are so uptight that they can’t even seem to get around to laughing it up from time to time. Truth is, most of the Jewish women I know are fucking hilarious and they are great people to hang around.

Jewish women value certain things like their time with you. That’s rather important given that it’s a date and you might not have the most time in the world to have fun. They also value breadwinners and other things that most women don’t give a shit about. Not to mention they are very nice in general.

I’m sure these reasons are enough to convince you to try and date a hot mature Jewish woman or at least try to fuck one.